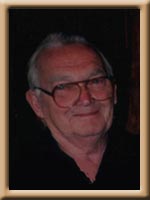 Born in Liverpool, he was a son of the late Cecil and Laura (Woodworth) Wagner

Eugene was a veteran of the second World War serving in continental Europe and worked at Mersey Paper Company for 36 years.

He was predeceased by his wife Frances and brothers Chester and Douglas.

Cremation has taken place under the direction of Chandlers Funeral Home, Liverpool. A private graveside service will be held at a later date. Family flowers only. Donations may be made to the Zion United Cemetery Fund.

Offer Condolence for the family of Wagner; Percy “Eugene”