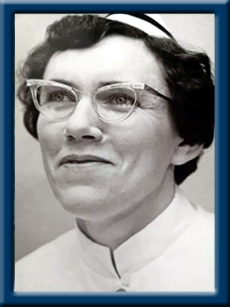 RICHARDSON – Elizabeth Catherine (McLean), age 97, passed away peacefully at home surrounded by her loving family, on November 14, 2022 following a short, courageous and very brave battle with cancer.
Born in North Brookfield, Elizabeth was the only daughter of Maude (Freeman-Farncombe) and William P. McLean.
Elizabeth attended Normal School (Nova Scotia Teachers College) in Truro in 1944 and taught school for three years in South Brookfield and Steam Mill Village before entering the Victoria General Hospital School of Nursing in 1947. Upon graduation in 1950 as a registered Nurse, she worked in a number of hospitals in Ontario and Nova Scotia. While nursing at Queens General Hospital, she met her husband Charles.
Elizabeth was a beloved wife, mother, grandmother, aunt and friend to all she met. She was an avid reader and Blue Jays fan discussing at great length all plays and players, first with her best friend Mabel Norman and, years later, with the apple of her eye, her beloved granddaughter Kristen.
Elizabeth was an active member of the Brooklyn Baptist Church, being involved in the Sunday School, Vacation Bible School, the Pioneer Club and the Women’s Missionary Society. She was also a member of the Brooklyn Women’s Institute and worked as camp nurse at Long Lake camp for two summers. Elizabeth also volunteered at Queens manor for several years.
Elizabeth is survived by her husband of 62 years, Charles; her daughter Cathy (Robert) O’Brien, her granddaughters Kristen, Katelyn and Jerika, grandchildren of her heart Timothy, Brandon and Dominic, daughter-in-law Tammie, nephews Bobby (Christine), Donald (Nadine), and Jimmy (Katrina).
Besides her parents, Elizabeth was predeceased by her sons Philip and Robbie and her brothers Robert and Harry.
Cremation has taken place under the direction of Chandlers’ Funeral Home, Liverpool, NS. A graveside memorial service will be held Friday, November 18, 2022 at 11:00 a.m. in Seaside Cemetery, Gardner Road, Brooklyn. A reception will follow in the Brooklyn Baptist Church vestry. No flowers by request, donations may be made to Long Lake Camp or to Queens County VON. Online condolences may be made to www.chandlersfuneral.com.

Offer Condolence for the family of Richardson; Elizabeth Catherine