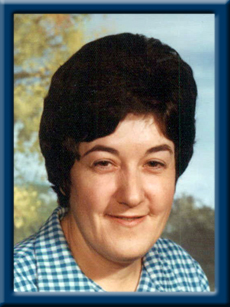 Lorraine Aline (Shupe) Quinn, age 79, born in Liverpool to Earl Frederick and Regina (Anthony) Shupe of Charleston, Queens Co., NS, passed away in the Queens General Hospital, Liverpool, NS on May 31, 2021 after a long battle with Parkinson’s Disease.
At the time of her death, Lorraine was a fifty year resident of Liverpool, NS. Lorraine was the oldest of 4 siblings, Harley, Merna, and Marilyn, now all deceased. Lorraine’s surviving husband (married fifty years) is historian, author and retired educational administrator, Robert Edwin Quinn, and she is also survived by a much loved niece and two nephews and their families: Kirk Earl Shupe, Charleston, NS; Cheryl (Gerhardt) Mcluckie, Ottawa, ON; and Andrew Conrad, Dartmouth, NS. Lorraine was extremely proud to be able to trace her numerous ancestors back to the Palatine, Germany and the founding of Lunenburg in 1759-60.
Lorraine had several major passions in her life; two of which were her husband and her Shupe family, especially her nephew Kirk, the son of her heart. Second was learning varied skills and teaching mathematics in the local schools (internship at Mount Pleasant, teacher in Mill Village, Liverpool Town and Brooklyn (elementary and Junior High), and Liverpool Regional Junior High School.
Lorraine graduated from the Nova Scotia Teachers College with a class A license in 1959 and then went on to study at Mount Allison, Acadia, St. Anne and Dalhousie Universities. In grade 12 provincials, she attained the highest math mark in NS and after, was awarded two scholarships. Lorraine also graduated in sewing and accounting. She produced much of her own clothing and tons of Icelandic sweaters and numerous afghans of which she gave as gifts and/or wore. She also did the accounts her her husband’s two businesses after he retired as a school administrator.
Lorraine loved to travel and accompanied her husband to spend winters in Florida at their own condo; traveled all over Canada and the USA to experience all the natural wonders and to seek out the numerous country shows at Opryland, the Opry, Dolly’s TN Park, parades and concerts, NY, Halifax and Liverpool. Her all time favorite was the late Kenny Rogers and she even got a scarf from Elvis. Her collections, including Kenny’s tambourines, is extensive. She loved Royal Doulton’s, miniature crystals, wooden carved birds, Charming Tails, Hummel’s and Blushing Bunnies… an extensive collection in the thousands.
Cremation has taken place under the direction of Chandlers’ Funeral Home, Liverpool, NS. A private family graveside service will be held at a later date in Trinity Anglican Cemetery, Bog Road, Liverpool. Reverend Cherry Workman officiating. In lieu of flowers, donations may be made to Queens General Hospital Foundation. Online condolences may be made to www.chandlersfuneral.com

Offer Condolence for the family of Quinn, Lorraine Aline