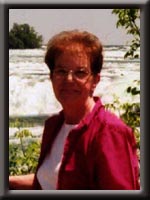 Born in Bridgewater,  she was a daughter of the late Robert Connolly and Mildred (Crouse) (Connolly) Clattenburg and step father Charles Clattenburg.

Sharon was a former employee of Stedman’s Dept. Store in Dartmouth,  Vic Mouzar’s Store in Brooklyn. and waitress for Transcotia Restaurant in Brooklyn for a number a years. She was an active member in the Liverpool United Baptist Church, where she served faithfully as a member of WWT  and beloved Sunday schooland Junior Church leader.

Besides her parents and step father, she was predeceased by two infant brothers Robert Jr. and Earl, her sister Jenneine (Connolly) Corkum and her brother Linwood Connolly.

Offer Condolence for the family of Zwicker, Sharon Rose