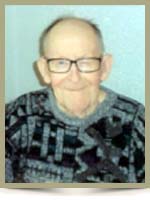 Zong, Clarence Alfred, 87, of Caledonia, Queens County, passed away on Wednesday, February 8th, 2012, in the Queens Manor, Liverpool.
Born in Caledonia, he was a son of the late Clarence Jacob and Olive Rae (Murray) Zong.
Clarence worked as a mechanic for many years at the Caledonia Irving Station and Steel and Engine Products, Liverpool before retiring from the Nova Scotia Power Commission. He enjoyed hunting, traveling and was well known for his ability for caning chairs. He was an avid cat lover, Clarence adored all animals and could often be found training raccoons on his property. He was a former student of the Nova Scotia School for the Blind and was able to read Braille.
He is survived by his loving wife of 64 years, the former Kathleen Judge; son Clarence Zong (Mary Jo Conway) of Hibernia; grandchildren Jimmy Zong (Cindy Conway), Rhonda (Neil) Frail, Ivan Zong (Shana Selig), Jessica Mansfield (Eddie MacNutt), Krista Marie Holder; great grandchildren Tobias, Kaleb, Riley Zong; sisters Gertrude “Trudy” Mugridge of Toronto, Ontario, Erma Melong of Bridgewater.
He was predeceased by a son James; sister Kathleen Smith; brothers James, Lawrence and Terrance.
Visitation will be held Saturday, February 11th, 2012, from 7-9 p.m., from Chandlers’ Funeral Home, Liverpool. A Graveside Funeral Service will be held Sunday, February 12th, 2012, at 2:00 p.m. from Hillcrest Cemetery, Westfield. Reverend John Boddy officiating. Family flowers only, donations may be made to  Queens Manor, Liverpool. Online condolences to the family may be made at www.chandlersfuneral.com

Offer Condolence for the family of Zong; Clarence Alfred