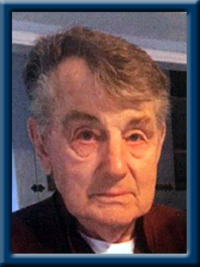 ZINCK – G.R. “Bob”, 88, of Bridgewater, NS , passed away peacefully in Queens General Hospital on Saturday, November 14, 2020.
Born in Bridgewater, Bob was a son of the late William and Mabel (Weagle) Zinck.
Bob worked for CN Rail for a number of years doing track repairs and maintenance. Following this, he began his own business, Zinck’s Taxi, in the town of Bridgewater. He enjoyed playing cards and darts, cooking, and, in his young years was known as a “pool shark’ as his skill could lend itself to his opponents losing their cash on hand. He also loved his cars and kept them immaculately clean.
Bob is survived by his son Robert of Bridgewater and his grandchildren Dylan and Morgan. His sisters Linda (Gerry) MacDonald of Riverview, NB; Mary Wile and June Zinck, both of Bridgewater. His brothers Jim (Carol) and John (Sharon), both of Bridgewater.
Besides his parents, Bob was predeceased by his wife Nancy (MacDonald) and his sisters Betty Wile and Patsy Robar and his brothers Michael and Bill.
Cremation has taken place under the direction of Chandlers’ Funeral Home, Liverpool, NS. There will be no funeral service. No flowers, donations may be made to the Kidney Foundation. Online condolences may be made to www.chandlersfuneral.com
The family wish to thank the nurses at the Dialysis Unit, Queens General Hospital for all their compassion and care shown to Bob.

Offer Condolence for the family of Zinck; George Robert “Bob”