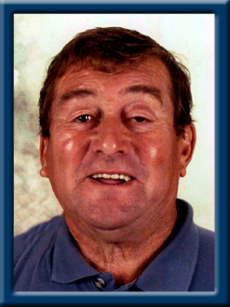 YOUNG – Robert “Bobby” Douglas, 81, of Moose Harbour, Queens County, passed away peacefully on Monday, September 28, 2020 in Queens General Hospital, Liverpool.
Born in Liverpool, Bobby was a son of the late Stuart and Margaret (Conrad) Young.
Bobby stared working at a young age; first with Tom Scobey fishing; Willis Manthorne spreading salt on the road; Basil Hanley, Everette and Clarence in the woods and delivering potato chips with Raymond Henley. He helped to dig out Moose Harbour then went to work with Mosher and Rawding Ltd, then Mosher and Rawding Enterprises for 37 years. He went to work with Irving Cranes and hauling wood chips for Lester Zwicker Trucking. His last place before retiring was with the Region of Queens. When Bobby wasn’t working, he enjoyed playing in the woodpile and cutting wood in the community. He also enjoyed playing hockey in his younger years, dancing to Dave Burbine and Traditional Country and driving stock car.
Bobby is survived by his wife of 59 years, Thelma (Tarr); his daughters Roberta (Chris) of Bridgewater; Ronna (John) of Caledonia; his sons: Robert (Sharon) and Richard (Kelly) both of Moose Harbour; Ronald (Angela) of Sandy Cove. His grandchildren Christine, Melissa, Jillian and Leigh-Ann and his great grandchildren Mason, Sadie, Landon, Conner and Madison. His brother Roland of Bramlea, ON.
Besides his parents, bobby was predeceased by a great granddaughter Samantha, his sisters Loretta Weaver and Faith Patterson.
Cremation has taken place under the direction of Chandlers’ Funeral Home, Liverpool, NS. A graveside memorial service will be held Friday, October 2, 2020 at 3:00 p.m. in Liverpool Baptist Cemetery. No flowers by request, donations may be made to Queens General Hospital Foundation. Online condolences may be made to www.chandlersfuneral.com
The family would like to thank Drs. Morash, Burrell, Crawford and Harris as well as the nurses in outpatients and medical floor at Queens General Hospital, palliative care and VON. All friends and family who helped especially Charlene White and Patti Emenau for all their support.
All those attending Bobby’s service are required to bring their own mask, practice physical distancing where possible and provide the funeral staff with contact tracing information.

Offer Condolence for the family of Young; Robert Douglas