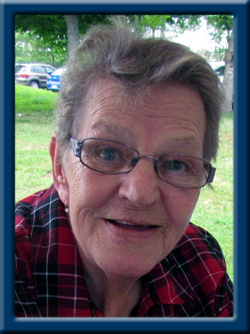 Click here to watch recording of Lavinia’s service
YOUNG – Lavinia Rosetta,74, of Pleasant River, Queens County, passed away peacefully on February 16, 2021 in Queens General Hospital, Liverpool, N.S. with family by her side.
Born in Liverpool, she was the daughter of the late William Everette and Emmeline “Emma” (Roy) Schrader.
Lavinia also known to her family and friends as “Sookie”, a nickname placed on her since she was a child and still today. Lavinia was also well known for her creativity in her crafts and sewing. She had made many brides very happy. She was a very hard working, single mom raising her four children, not only working full time, but also did part time jobs for many people. When first moving to Caledonia with her four children, she worked at the old North Queens Nursing Home as a NA, then worked various jobs such as the old Foodland Store, Bobby’s Canteen, and the Co-op Store.
Lavinia then went on to work as a custodian at North Queens School for many years, then decided to open her own sewing shop in Caledonia which was her passion. After closing her store, she once again worked at the new North Queens Nursing Home as a environmental worker until she retired. She never gave up her passion for sewing. She continued to create and sew for many people. Lavinia and her daughter sewed and brought their creations to the Caledonia Farmer’s Market. Her quilts were a hit and people all over the world bought them. When the Caledonia Legion was opened, she enjoyed playing darts and playing bingo at the North Queens Fire Hall. Lavinia enjoyed her family and friends and loved spending time with them. She especially enjoyed the family reunions.
Lavinia is survived by her partner of 36 years Charles Varner of Pleasant River; son Gary (Melinda) Young of Thunder Bay, Ont., daughter’s Lucille (William) Mailman of North Brookfield; Tammy Young (Larry Power) of Oxbow, Saskatchewan and daughter in law Rosalie Young of Westfield; 13 grandchildren and 15 great grandchildren; sisters Pauline Conway of Liverpool, Charlotte (Harvey) Hallet of Lockeport, Dianne (Doug) Whynott of Liverpool; brothers Kenneth (Valerie) Schrader of Mersey Point; Burton Schrader of Bridgewater, Borden (Jean) Schrader of Wileville; sister in law Deanna Roy of Liverpool; brother in law Gerald Balcom of Grande Prairie, Alberta.
Besides her parents, Lavinia was predeceased by her sons Michael Young in infancy and Burton Young; granddaughter Robin Young, grandson Ryan Young in infancy. Sisters Jeanette MacNutt; Catherine Balcom; Brothers Johnny Roy and Joseph Schrader. Brothers in law Gordon MacNutt and Timothy Conway. Sisters in law May Schrader and Marie Schrader.
Cremation has taken place under the direction of Chandlers’ Funeral Home, Liverpool. A graveside service will be held in Hillcrest Cemetery, Westfield on Thursday, September 23, 2021 at 11:00 a.m., followed by a reception at the Westfield Community Hall, Westfield. Family and friends are invited to pay their proper respects to our wonderful mother. You were so loved and will be greatly missed. Donations may be made to North Queens Fire Association. Online condolences may be made to www.chandlersfuneral.com.
Lavinia’s family would like to thank the Doctors, Nurses, Custodians and Cafeteria staff of Queens General Hospital for their kindness and understanding during this difficult time.

Offer Condolence for the family of Young; Lavinia Rosetta