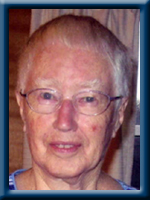 WOLFE – Olga Jean, 87, of Mill Village Queens County, passed away suddenly in Queens General Hospital, Liverpool on Wednesday, September 3, 2014.
Born in East Port Medway, Queens County, she was a daughter of the late Wilnef and Carrie (Vogler) Wolfe.
Olga worked most of her life at the grocery store in Mill Village retiring at the age of sixty. She was an active member of Bethany United Church and the UCW and held various positions within the church; the last was collecting the offering at Sunday service on August 31. She enjoyed card parties and, in her younger years, camping. She will be fondly remembered for her sense of humor.
She is survived by her sister-in-law Jennie Wolfe of Queens Manor, Liverpool and numerous nieces and nephews.
She was predeceased by her siblings Earl Wolfe, Elmer Wolfe, Rhoda Wolfe, Nina Anthony, Kathleen Hatt, Ruth Mills, Flora Coombs and Evelyn Parks.
Visitation will be Sunday, September 7, 2014 from 7 p.m. until 9 p.m. in Chandlers’ Funeral Chapel, Liverpool where funeral service will be on Monday, September 8, 2014 at 11:00 a.m.. Lay Minister Peter Anthony officiating. Burial will be in Mill Village Cemetery, Mill Village. Family flowers only, donations may be made to Bethany United Church, Mill Village. Online condolences may be made to www.chandlersfuneral.com

Offer Condolence for the family of Wolfe; Olga Jean