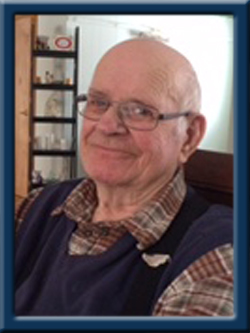 Wolfe – Lawrence Edward, of Milton, Queens County, passed away peacefully on Friday, January 22, 2021, in Queens General Hospital, Liverpool at the age of 89, two months shy of his 90th birthday.

Born in Liverpool, he was a son of the late Harvey and Mary (Baker) Wolfe.

Lawrence worked many jobs over the years. In his younger days he worked at the Halifax shipyards and sailed on the Vineland, which often docked in Florida. He was also self employed in the forest industry in his earlier years, he also worked as an engineer for Mersey Seafoods, owned a successful well ring business and also managed the local Irving Station in Liverpool for a number of years, retiring at the age of 60 in the early 1990’s. He was an avid outdoorsmen and enjoyed snowmobiling, camping, clamming and he loved hunting with his sons. Lawrence was an animal lover and raised farm animals for many years. In his spare time he enjoyed a good game of crib. Lawrence was a hard worker, providing for all of his 8 children. Above all else, he was most passionate about his family and spending time with them.

A funeral service will be held Tuesday, January 26th at 11:00 a.m. at Chandlers’ Funeral Home in Liverpool. Pastor Stephen Baker officiating. There will be a live webcast starting at 10:55 a.m. through the funeral home website at chandlersfuneral.com and the recorded service will also be available online through the website approximately four hours after the service. Due to COVID-19 (as Lawrence would say “The 19”) protocols, there is limited seating available. Family and close friends will be given priority and masks are mandatory. Family flowers only, donations may be made to the Queens general Hospital Foundation. To share memories and condolences, please visit www.chandlersfuneral.com

The family would like to send out a special thank you to Home Care, the Nurses on the medical floor of Queens General Hospital and also to Dr. Gary Ernest.

Offer Condolence for the family of Wolfe; Lawrence Edward