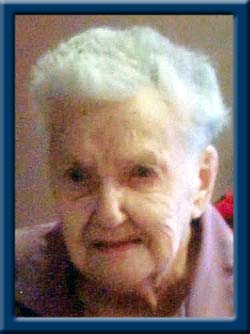 WOLFE – Jennie L., 102, of Liverpool, formerly of East Port Medway, Queens County, passed away peacefully in Queens Manor, Liverpool on Saturday, October 24, 2015.
Born in Northwest Bay, she was a daughter of the late Theodore and Winnie (Clattenburg) Parks.
Jennie is survived by her daughter Kathryn Lemieux of Liverpool; her son William “Billy” of Bridgewater; her grandchildren Donna (Terry) Orme of Milton, David (Kandy) Lemieux of Lower Sackville, Amanda (Kirk) Wentzell of Bridgewater, Crystal (Travis) Bruhm of Hebbville; her great grandchildren Preston, Emily and Chandler Bruhm, Katie Wentzell and Ben Orme; her sister Doris Wentzell of Bridgewater; her brother Donald (Betty) of Northwest Bay.
She was predeceased by her husband Elmer, her son in law Louis Lemieux, her daughter in law Shirley (Whynot) Wolfe, and her brothers Max, George and Dean.
There will be no visitation. Funeral service will be held Tuesday, October 27, 2015 at 11:00 a.m. in Chandlers’ Funeral Chapel, Liverpool. Lay Minister Peter Anthony officiating. Reception to follow service. Burial will be in Mill Village Cemetery. Family flowers only, donations may be made to Queens Manor, Liverpool or the Mill Village Cemetery Fund. Online condolences may be made to www.chandlersfuneral.com

Offer Condolence for the family of Wolfe; Jennie