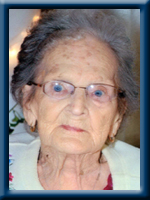 WOLFE – Gwendolyn H., 96, of Queens Manor, Liverpool, formerly of Brooklyn, Queens County, passed away peacefully in Queens General Hospital, Liverpool on Thursday, January 8, 2015.
Born in Halifax, she was a daughter of the late Sidney and Violet (Whynot) Levy.
Gwen was a former employee with Queens General Hospital working as a head cook in the kitchen for over twelve years. She enjoyed hunting and camping as well as horse back riding. She knitted, did ceramics and reading. She enjoyed boat racing and traveling; Florida being her “go to” destination having visited there at least six times. Her passion was her family. She enjoyed her times with her many grandchildren teaching them her many talents when she could.
She is survived by her daughter Carolyn (Donnie) Kriwokeon of Surrey, BC, her son in law Reg McLeod of Brooklyn and her many grandchildren, great grandchildren and great great grandchild. Her half brother Wayne Whynot of Lunenburg.
She was predeceased by her husband Stanley; her daughter Gwendolyn McLeod, grandsons Gordon and Sidney, brothers Oliver, Ivan and Earl.
Cremation has taken place under the direction of Chandlers’ Funeral Home, Liverpool. A private graveside memorial service will be held at a later date. With Reverend Dr. Steven Hopper officiating in Seaside Cemetery, Brooklyn. No flowers by request, donations may be made to a charity of your choice. Online condolences may be made to www.chandlersfuneral.com

Offer Condolence for the family of Wolfe; Gwendolyn Helen