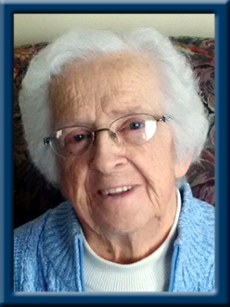 WOLFE – Freda Ianthe, 89, of Brooklyn, Queens County, passed away peacefully in Queens General Hospital, Liverpool on Sunday, December 25, 2016.
Born in Upper Chelsea, she was a daughter of the late Raymond and Ella (Baker) Uhlman.
Freda was a long time member of the Brooklyn United Baptist Church. She enjoyed her family and spending time with them on every occasion.
She is survived by her daughters Karen (Ed) Dumeah of White Point; Janice (Donald) Fisher and Joyce (Terry) Soper, both of Brooklyn. Her sons Francis Jr. (Karen) of Prince Rupert, BC and Bruce (Kelly Fisher) of Brooklyn. Twelve grandchildren, nine great grandchildren and one great great granddaughter. Sisters Dona Nauss of Bridgewater.
Freda was predeceased by her husband of 65 years Francis, her sisters Pearl Golden, Vivian Uhlman, Yvonne Crouse, Margaret Kemp, Annie Haines and Joyce Richards and her brothers Ronald and Donald.
Cremation has taken place under the direction of Chandlers’ Funeral Home, Liverpool where visitation will be held this evening, Tuesday, December 27, 2016 from 7 until 9 p.m. and funeral service will be held Wednesday, December 28, 2016 at 2:00 p.m. Reverend Dr. Steven Hopper officiating. Reception to follow. A private family interment will take place at a later time. Family flowers only, donations may be made to the Canadian Cancer Society, the Alzheimer’s Society of Nova Scotia or the Brooklyn United Baptist Church. Online condolences may be made to www.chandlersfuneral.com.

Offer Condolence for the family of Wolfe; Freda Ianthe