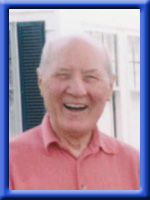 Born January 9th, 1924 in LaHave, Lunenburg County, he was a son of the late Edgar and Katherine (Corkum) Wolfe.

Doug sailed on the Maid of Sterling and Markland for the Mersey Paper Company. He was a veteran of World War II serving in Germany, France and Holland as a tank driver. At the end of the war upon his discharge he was awarded the France and Germany Star and the Canadian Volunteer Service Medal . Doug operated a taxi business in the Liverpool area for over 60 years, also serving as a part-time chauffeur for Bowater Mersey Paper Company. From 1965 to 1990 he and his wife, Margaret, owned and operated Wolfe’s Grocery Store in Sandy Cove, Queens County. He was a member of the Veteran’s Club and the Royal Canadian Legion, Branch 38, Liverpool.

He was predeceased by his sisters Marion Richards, Ruby Dowell and brother Ronald.

At Doug’s request there will be a private family service to be held at a later date. In lieu of flowers donations may be made to the Queens General Hospital Foundation or a charity of your choice. Online condolences may be made at www.chandlersfuneral.com

Offer Condolence for the family of Wolfe; Douglas Moyle