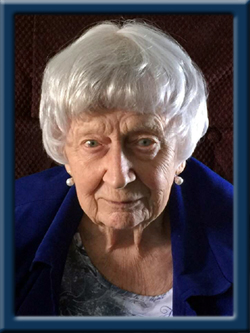 Winters, Evelyn Pauline “Polly”, age 92, of Mersey Point, Queens County, passed away peacefully on Tuesday, September 8th, 2020, in South Shore Regional Hospital, Bridgewater, surrounded by her loving family.
Born in Shelburne, she was a daughter of the late Frances and Racheal (Stuart) Burgess.
Polly taught school for many years in Port Mouton and in Riverview before going to work as an accountant for the law firm of Milford and Freeman, in Liverpool. She later went to work for the Queens County School Board up until her retirement. Polly was an avid volunteer, having spent countless hours working for the Queens General Hospital Foundation and also the Hospital Hustle. She had many hobbies, such as playing bridge, bowling, knitting, sewing, gardening and feeding her humming birds. Polly also had a love for fashion and made many of her own clothes over the years. Above all else, she was most passionate about her family and spending time with them.
She is survived her children, Bonnie Winters, of Bridgewater, Myles Winters (Paula Oickle), September Winters, Heather Winters (Barry Conrad), all of Liverpool, Holly Winters, of Vancouver; grandchildren, April, Shane, Lisa, Matthew, Daniel, Clay, Reid; great-grandchildren, Drew, Kylee, Chandler, Brynn, Harley, Brandon, Sebastian, Shailyn, Adrienne, Cameron, Heather.
She was predeceased by her loving husband, Donnie; grandson, Daniel and brother, Robert Stuart in infancy.
Cremation has taken place under the direction of Chandlers’ Funeral Home, Liverpool. The family will receive friends from 2-4 P.M., Wednesday, September 16th, 2020, at Chandlers Funeral Home.  No flowers by request, donations may be made to the Queens General Hospital Foundation and to the Queens County Food Bank. Online condolences may be made to www.chandlersfuneral.com

Offer Condolence for the family of Winters; Evelyn Pauline “Polly”