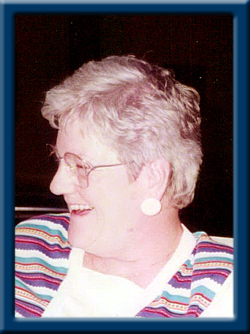 WINTERS – Danna, 75, of Liverpool, Queens County, passed away peacefully in Queens General Hospital, Liverpool on Thursday, September 29, 2016.
Born in Liverpool, she was a daughter of the late Gilbert and Mantanna (Godfrey) Winters.
Danna worked for the sheriff’s department for many years until her retirement in 1996. She was an honourary member of the Mersey Branch #38, Royal Canadian Legion, Liverpool and loved to play darts. She attended every show her husband , Gary, performed at up until recently when her health issues made it too difficult to travel. She will be fondly remembered by her many friends.
She is survived by her husband, Gary, her daughters Leanne Garvie, of Bridgetown, NS; Christie (Chris) Thomas of Upper Tantallon, NS and their children Claire and Paige who had a special place in Grammie’s heart; Angela (Andrew) Smith and their children Dylan and Devin, of White Point; Amy (Darren) Foley and their children Kody and Seth of Milton, NS. Her sister Reen Marcipont of Kingston, NS and her brother Barry (Emily) of Leduc, AB.
Danna was predeceased by her son Ian LaPier; her sister Claudia Giles and her brothers Kay, Donovan and Dale.
Cremation has taken place under the direction of Chandlers’ Funeral Home, Liverpool. At Danna’s request, there will be no funeral service. No flowers by request, donations may be made to the Canadian Cancer Society. Online condolences may be made to www.chandlersfuneral.com

Offer Condolence for the family of Winters; Danna