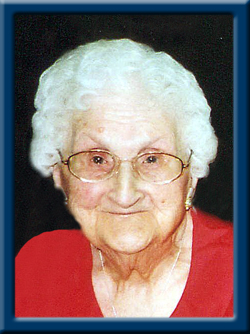 WILLIAMS – Mary Amelia, 98, of Port Mouton, Queens County, passed away peacefully in Queens Manor, Liverpool on Wednesday, May 25, 2016
Born in Port Mouton, she was a daughter of the late Isaiah and Hattie (McLeod) Broome.
Mary was a loving but determined mother who, after the death of her husband, Raymond, raised her family by herself. She enjoyed the little things in life such as shopping, playing cards especially crazy eights with her granddaughter, king bingo and watching soap operas on television.
She is survived by her daughters Christine (Calvin) Colp of Bridgewater; Peggy Williams (Fred Westhaver) of Liverpool, her sons James (Lillian Thorburne), Gary and Clarence (Louise), all of Port Mouton. 13 grandchildren and numerous great grandchildren and great great grandchildren.
She was predeceased by her husband Raymond, her sisters Ida Giffin, Esther Allison and Deanna Hupman and her brothers Percy and Archibald.
Visitation will be Sunday, May 29, 2016 from 7 until 9 p.m. in Chandlers’ Funeral Home, Liverpool. Funeral service will be Monday, May 30, 2016 at 11:00 a.m. in Chandlers’ Funeral Chapel, Liverpool, with a reception to follow. Burial will be in Peaceful Hill Cemetery, Port Mouton. Online condolences may be made to www.chandlersfuneral.com

Offer Condolence for the family of Williams; Mary Amelia