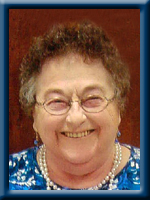 WILLIAMS – Madeline V., 65, of Port Mouton, Queens County, passed away peacefully on Monday, January 26, 2015 in Queens General Hospital, Liverpool, surrounded by her loving family.
Born in Southwest Port Mouton, she was a daughter of the late Lawrence and Marie (Bowers) Theriau.
Madeline was a loving, caring, compassionate wife, mother, grandmother, sister and friend. She always put her boys and family first with much love and pride. She worked at Bluewave Seafoods in Port Mouton up until 1999 when she retired due to her health. She loved camping, playing bingo and kingo bingo and listening to country music. She was a strong supporter of community functions. She was always in the yard during the summer months greeting those who were headed to Carter’s Beach and even offering her driveway for parking. She will be fondly remembered as someone who never wanted much for herself, always offered a helping hand where she could and taught the art of slowing down to see the beauty and to enjoy the simple gifts that life has to offer.
She is survived by her husband Gary, her sons Farin (Corrina) Theriau of Hunt’s Point, Beryle (Sue) Theriau of Milton, Bryden Williams at home, grandsons Ryleigh Theriau, Ben and Ayden Theriau, sister Mary Anne Carver (Donnie Williams) of Southwest Port Mouton, brothers Lovette (Tammy) of Port Joli, Lawrence (Karen Borden) of Milton.
She was predeceased by an infant brother.
Visitation will be Sunday, February 1, 2015 from 7 until 9 p.m. and funeral service will be Monday, February 2, 2015 at 11:00 a.m., both in Chandlers’ Funeral Chapel, Liverpool. Burial will be in Peaceful Hill Cemetery, Port Mouton. Family flowers only, donations may be made to the Queens General Hospital Foundation or the Nova Scotia Lung Association. Online condolences may be made to www.chandlersfuneral.com

Offer Condolence for the family of Williams; Madeline Valerie