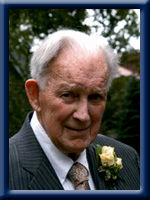 In his 91st year, Kenneth Wilkinson passed away peacefully at home on July 30th, 2011 surrounded by the love of his family.  In the shadow left by this wonderful man lay countless lives and groups forever changed and pathways carved where none had been before.
Born April 24, 1921, in Toronto, the eldest of three children, Ken enjoyed a vibrant childhood, participating in countless community groups where his life of service began in roles including that of King Scout and church youth group leader.  He enhanced his education by attending radio college and this expertise was integrated immediately after joining the Navy 1943 where he served working on the radar system in Newfoundland.  While on a pass visiting Halifax, Ken met the love of his life, “Puzz”, and they married December 14, 1944.  With his Navy service behind him, Ken began his work life at Northern Electric in Halifax where his natural leadership and further specialized education led to promotions and career opportunities that would ultimately take him to countries around the world and back.  His career would involve moving to Winnipeg, Vancouver, Toronto, Montreal, Hong Kong, Boston and Puerto Rico prior to establishing his retirement  residence in Beach Meadows, Nova Scotia.
Consistent themes evolved regardless of where Ken and his family were living.  Primary among them was Ken’s gift for friendship and the skill for using the unique features of any community as a way to celebrate those friendships.  It might have been throwing curling rocks, racing sailboats or touring around the South China Sea in his sailing junk.  Always during Ken’s working life there was ample time to explore, find adventure and celebrate life regardless of the location or methods used.
Ken demonstrated an unusual version of retirement living.  Once his professional career came to a close and he was able to establish a longer term presence within the Queens County community, he discovered a new vocation in a life of service.  An immediate interest in municipal politics began with a wish to save a local school.  This evolved to his participation on Council as a counselor and Deputy Warden for twelve years.  During this same period, he served as President of the Union of Nova Scotia Municipalities.  Additionally, Ken offered leadership to countless community groups and Boards including roles as Founding Chair of the Queens Community Health Association, the Queens Community Health Board, the Coffin Island Lighthouse Heritage Society, and the Seaside Recreation and Community Centre.  He served as a Board Member for Queens General hospital, Queens County Museum, Queens District School Board, Queens Manor Homes for Special Care and Emmanuel United Church.  He was the recipient of many awards for his service including Volunteer of the Year for Queens County.
Ken continues to serve even after his passing by offering his body to assist with the advancement of medical education and research at Dalhousie University in Halifax.
Survived by his three children, daughters Lyn Oakley (Sherman) Eagle Head,  Carol Wilkinson (Jim Pickard), Toronto and son Brian (Dale Webber), Montreal.  Sadly missed for his playful, loving spirit by his grandchildren Doug (Juli), Afghanistan/Texas, Kathy, Liverpool,   Jeremy, Rossland, B. C., Mark, Seoul, S. Korea, and Michael, Montreal and great grandchildren   Abe and Deena of Liverpool and Katelyn, Spencer and Bailey of Texas. Also a number of nieces, nephews and cousins.
He was predeceased by his wife of 65 years, Audrey “Puzz” (Wharton), brothers Ivan and George.
Funeral service will be Thursday, August 4th, 2011 at 1:00 p.m. from Emmanuel United Church, Beach Meadows. Lay Minister Peter Anthony officiating. A reception will be held in the Beach Meadows Hall following the service. The family wishes to express their profound gratitude to Dr. Tim Woodford for the friendship and care provided to Ken and the extraordinary compassion and guidance extended to family. Those wishing to make a donation in Ken’s memory are invited to support the Queens General Hospital Foundation, P. O. Box 370, Liverpool, NS B0T 1K0. Online condolences may be made to www.chandlersfuneral.com.

Offer Condolence for the family of Wilkinson; Kenneth