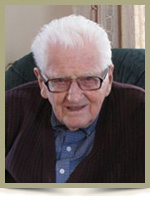 Harry Stewart Wiles, 94,  of Brooklyn, Queens County, passed away peacefully on January 31st, 2011 at home with his family and friends by his side.

Born in Greenland, Annapolis County, he was a son of the late Silas and Sadie (Buckler) Wiles, a family of twelve siblings.

Harry grew up on a farm and attended school in Bear River East. He has always kept in touch with his family and friends from childhood. During World War Two, Harry enlisted in the Royal Canadian Artillery, 4th Light Anti-Aircraft Battery on May 13th, 1940 and served overseas until he was discharged June 9th, 1945. He was fondly known as “Gunner Wiles”. He received a medal from the French Government in France for helping in the Freedom of Normandy. Harry was proud to have served his country and would tell his many stories to anyone who wanted to listen.

After his service overseas, he and his precious wife of 70 years, Bessie, began their family business “Wiles Store To Door”. Bessie operated the store while Harry ran a grocery delivery truck door to door until their retirement in 1984. Harry was a member of Pilgrim United Church in Brooklyn and served on the Board of Stewards for many years. He and Bessie enjoyed their many friends whom they played cards with and members of the “Jolly Rogers” Square Dancing Group. He was an avid story teller of “funny experiences” with his many customers he dealt with over the years as well as his friends.

Harry was a friend to all who knew and loved him, always worrying about others. He was a wonderful husband, father, grandfather, great grandfather, brother and uncle. He had a great passion for his family, their accomplishments and enjoyed all special occasions celebrated with family and friends. He will be remembered as a friend to all, kind and generous, a real gentleman.

Visitation will be  Saturday, February 5th, 2011 from 7 until 9 p.m. and funeral service will be Sunday, February 6th, 2011 at 2:30 p.m. both in Chandlers’ Funeral Chapel, Liverpool. Lay Minister Peter Anthony officiating. Burial will be Monday, February 7th, 2011 at 1:30 p.m. in Seaside Cemetery, Brooklyn. Family flowers only, donations may be made to Pilgrim United Church General Fund or the Queens General Hospital Foundation. Online condolences may be made to https://www.chandlersfuneral.com

“Our Hearts are Forever Broken”

Offer Condolence for the family of Wiles; Harry Stewart