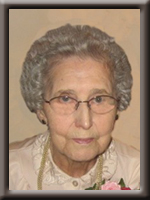 It is with great sadness that the family of Bessie Loretta Wiles, 91, of Brooklyn, Queens County, announces her passing on Wednesday, December 1st, 2010  in the Queens General Hospital, Liverpool, surrounded by her loving family and friends.

Born in Southwest Port Mouton, she was a daughter of the late Walter and Elsie (Burgess) Fisher.

In her early years, Bessie enjoyed family activities which included skating, tobogganing, picnics and trips to her parents and in laws in Bear River East. She was a former member of the Home and School Association, Broom Ball team, Brooklyn and Women’s’ Institute. Bessie taught school in Southwest Port Mouton for 8 years while her husband Harry served overseas during World War II. Upon his return, they purchased a home in Brooklyn where they resided to date. She and Harry began their own business “Wiles’ Store To Door” with Bessie operating the store while Harry ran a grocery delivery truck door to door until their retirement.

Bessie was a member of Pilgrim United Church, Brooklyn and the United Church Women.  She and Harry enjoyed the many friends whom they played cards with and square danced with. She enjoyed baking and was an expert at making molasses cookies, doughnuts, brown bread biscuits and muffins. She was an avid knitter and knit many mittens for the church as well as her grandchildren.

Bessie was a friend to all who knew and loved her. A wonderful wife, mother, grandmother, great grandmother, sister and aunt, she had a passion for her family, their accomplishments and all special occasions. She will be fondly remembered as very pleasant and kind; a real lady.

She was predeceased by her son Carl, sisters: Madelyn Smith and Bernice Nichols and brother Elmer Fisher.

Visiting will be held Saturday, December 4th, 2010, from 7-9 p.m. and funeral service will be held Sunday, December 5th, 2010, at 2:30 p.m., both from Chandlers’ Funeral Home, Liverpool followed by a reception. Lay Minister Peter Anthony officiating   Family flowers only. Donations may be made to Pilgrim United Church General Fund. Online condolences may be made at www.chandlersfuneral.com  “Our heart are forever broken.”

Offer Condolence for the family of Wiles; Bessie Lorretta