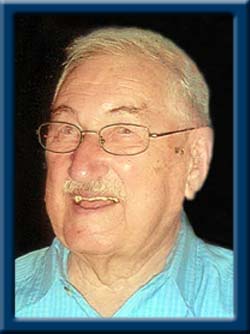 WILES – Albert Vaughan, 88, of Liverpool, Queens County passed away suddenly in the QE II Health Science Centre, Halifax on Tuesday, October 6, 2015.
Born in Truro, he was a son of the late Neil and Hilda (Vaughan) Wiles.
Bert started his working career as a draftsman then attended Normal College in Truro to become a teacher. He moved to Liverpool in 1948 where he taught math and music until 1957, when he went to work with Bowater Mersey Paper Company, Brooklyn. He worked the finishing floor, but soon moved to the sales department and later became traffic manager. At his retirement, Bert was Vice-President of Canadian Sales for Bowater North America. He enjoyed hunting and fishing and was involved in his community serving as a cadet leader and a band leader as well as serving as chairman for the Queens General Hospital Foundation and the Health Board. His love of music was prominent as he played in many local dance bands, The Mersey Band, sang in church choirs and the Queens Chorale.
He is survived by his wife Myra (Norman); his son John (Stephanie) of Liverpool, his grandchildren Ashleigh and Justin; great grandchildren Julian and Achilles; his sisters Carolyn (David) Duff of Burlington, ON; Laura (Eric) Lane of North York, ON; his brother Donald (Elsabeth) of Carleton Place, ON and many nieces and nephews.
Cremation has taken place under the direction of Chandlers’ Funeral Home, Liverpool. A funeral memorial service will be held on Tuesday, October 13, 2015 at 2:00 p.m. in Chandlers’ Funeral Chapel, Liverpool Reverend Sheila Redden-Smith officiating. A private family interment will take place at a later time in Zion United Cemetery, College Street, Liverpool. Family flowers only, donations may be made to the Queens General Hospital Foundation. Online condolences may be made to www.chandlersfuneral.com

Offer Condolence for the family of Wiles; Albert Vaughan