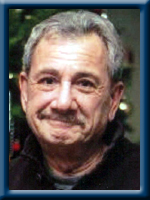 WHYNOTT – Blaine LeRoy, 60 of Liverpool, Queens County, passed away peacefully in Queens General Hospital, Liverpool on Wednesday, August 6, 2014 with his family by his side.

Born in Liverpool, he was a son of Elmer and Joyce (Slauenwhite) Whynott of Liverpool.

Blaine was educated in Liverpool and was a graduate (1977) of St. Mary’s University with his BA and was nominated class valedictorian. He also attended Acadia University and graduated in 1982 with his BEd. After teaching briefly, he went on to work at Michelin returning to the classroom upon retirement. Blaine was a popular quiz master and loved creating new games. He hosted the “Coffee Club” radio show on Q.C.C.R.; the local radio station. He was passionate about his family, friends, sports and animals.

Surviving besides his parents are his wife of 14 years Dale Saulnier, his daughters Kimberley of Liverpool and Erin of Halifax, his brother Wendell (Karen) of Liverpool, his niece Tasha (Robert) Tyrrell of Halifax and nephew Ryan Whynott of Toronto.

Cremation has taken place under the direction of Chandlers’ Funeral Home, Liverpool. Funeral service will be Wednesday, August 13, 2014 at 11:00 a.m. in Liverpool United Baptist Church. Reverend Steven Hopper officiating. A private family committal will be at a later time. No flowers by request, donations may be made to Q.C.C.R. Radio or to the Queens County S.P.C.A.. Online condolences may be made to www.chandlersfuneral.com

Offer Condolence for the family of Whynott; Blaine LeRoy