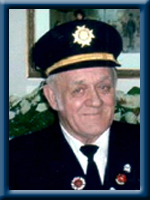 WHYNOT – Wilfred H. “Buzzy” 76, of Mill Village, Queens County, passed away peacefully in Queens General Hospital on Tuesday, November 22, 2011 with his wife and family by his side.
Born in Liverpool, Buzzy was a son of Marion (Wagner) Whynot of Liverpool and the late Reginald Whynot.
Buzzy was a former construction worker and truck driver. He was a member of the Mill Village Fire Department for 55 years, a member of Bethany United Church, Mill Village and a life member of the Nova Scotia Guides Association.
Surviving are his best friend and loving wife of 57 years Joyce (McLaughlin); daughters Judi Maillett of Liverpool, Susan Levy of West Berlin, Dottie (Gary) Hatt of Mill Village and Angela (Ronald) Young of Brooklyn. Sons Greg (Linda) of Liverpool and Richard (Patti) of Pender Island, BC. Granddaughters: Alicia (Andrew), Lisa (Adam), Christie (Dustin) and Krystle (Jesse). Grandsons: Josh (Angela), Brendan (Amanda), Christopher (Nicole) and Shawn (Tash). Great grand daughter Leigh-ann. Sisters Margie (Carleton) Manthorne of Mill Village, Phyllis (Sandy) Soderstrum of Chilliwack, BC, Patty (Roger) Whynot of Liverpool and Sharon (Adrian) Westlake of Mersey Point. Brothers Gillie (Mona), Claire (Janet), Peter (Joan), Cliff and Ricky, all of Liverpool Stevie (Doreen) of Brooklyn.
He was predeceased by Sisters May Awalt and Barbara Fancy , brothers Jack and Paul and son in law Murray Levy.
Visitation will be Friday, November 25th, 2011 from 7 until 9 p.m. in Chandlers’ Funeral Home, Liverpool. Funeral service will be Saturday, November 26th, 2011 at 11:00 a.m. from Bethany United Church, Mill Village. Lay Minister Peter Anthony officiating. A private family burial will take place at a later date following cremation. No flowers by request. Donations may be made to Bethany United Church, Mill Village or the Mill Village Fire Department. Online condolences may be made to www.chandlersfuneral.com

Offer Condolence for the family of Whynot; Wilfred Henry “Buzzy”