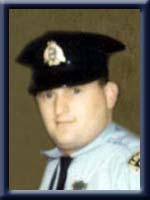 Born in Milton, he was a son of the late John and Pearl (White) Whynot.

Wayne was a self-employed carpenter and a former police constable for the Town of Liverpool.

He is survived by his sisters: Frances Burkholder (David Waterhouse) of Bridgewater, Wilma MacLeod and  Linda (Clyde) Whynot  both of Liverpool.  Sister in law Vivian Whynot of Milton.  Many nieces and nephews.

He was predeceased by his brother Rodney.

Cremation has taken place under the direction of  Chandlers’ Funeral Home, Liverpool. A graveside funeral service will be held Saturday, April 14th, 2012 at 4:00 p.m. in Trinity Anglican Cemetery, Bog Road, Liverpool. Chaplain Donald Lawton officiating. No flowers by request. Donations may be made to The Kidney Foundation of Nova Scotia or the Canadian Cancer Society.  Online condolences may be made to www.chandlersfuneral.com

Offer Condolence for the family of Whynot; Wayne