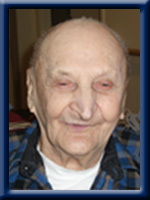 Born in Liverpool, he was a son of the late Angus and Mary Jane (Whynot) Whynot.

Louie will be fondly remembered for his conversations with anyone he met while on his walk to the local well for water.

He is survived by numerous nieces and nephews.

He was predeceased by his sisters Margaret, Ada and Gertrude and brothers Hasting and George “Robbie”.

Visitation will be from 10:00 until 11:00 a.m. and funeral service will be at 11:00 a.m. both on Saturday, March 5th, 2011 in Chandlers’ Funeral Chapel, Liverpool. Chaplain Donald Lawton officiating. Burial will be in Trinity Anglican Cemetery, Liverpool. Family flowers only, donations may be made to Queens Manor, Liverpool. Online condolences may be made to www.chandlersfuneral.com

Offer Condolence for the family of Whynot; Walter Earl Lewis