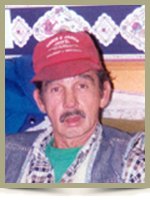 Born in Liverpool, he was a son of the late Beatrice (Slauenwhite) and Clarence Whynot.

He worked many years at Mersey Seafood and for Chris & James Tree Removal. Stanley could often be found socializing in front of the Liverpool Post Office. He enjoyed playing Kingo and drinking McDonald’s coffee.

Cremation has taken place under the direction of Chandlers’ Funeral Home, Liverpool. A graveside service to celebrate Stanley’s Life will be held on Friday, August 23rd, 2013 at 11:00 A.M., from Trinity Anglican Cemetery, Bog Road, Liverpool. Reverend Judy Cross officiating, Family Flowers only. Donations may be made to Trinity Anglican Church, Liverpool. Online condolences may be made to the family at www.chandlersfuneral.com

Offer Condolence for the family of Whynot; Stanley Stephen