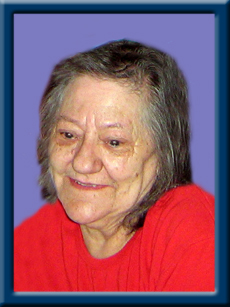 WHYNOT – Shannon V., 77, passed away peacefully in Queens General Hospital, on Saturday, December 23, 2017.
Born in Digby, she was a daughter of the late George and Jean (Brooks) Fletcher.
In her early years, Shannon worked in nursing homes in the Bear River Area providing care to the residents. Following her move to Liverpool, she worked at the former K&W. Book Binding Company as well as Starvin’ Marvin’s Convenience Store and the Main Street Quik Way. Shannon enjoyed creating personal gifts for her family using plastic canvas and yarn. She also enjoyed country music and singing as well as baking, cooking and sewing. She will be sadly missed, but lovingly remembered, by her children, grandchildren and her great grandchildren.
Surviving are her daughters Amanda at home; Heather (Ronald) Whynot of Bridgewater; Karen (Brian) Wamboldt of Liverpool; her sons Scott of Halifax and Clyde (Janie) Trimper of Bear River. Her grandchildren Tammy (Neil) Harris, Bradley Whynot (Tina Efford), Troy Whynot (Kaylen Bruce), Travis Whynot (Brittney Danielle), Kim Wamboldt (Terry Warrington), Vanessa Wamboldt (Darren Muzzerall) and Dawson Trimper. Great grandchildren Dakota, Brandon, Katie, Saige, Lidia, Miah, Liam, Rashawn, Terrance, Nevaeh. Her sisters Marcia Buckler (Dave Brooks) and Nettie Surette, both of Bear River; Peggy (David) Austin and Debbie Fletcher, both of St. Thomas, ON. Her brother George (Janet) of Mersey Point. Her special friend Coreen Thorbourne of Liverpool.
Besides her parents, Shannon was predeceased by her first husband Clyde Trimper, her second husband Robert Whynot and her sister Barbara Ann.
Visitation will be today, Wednesday, December 27, 2017 from 7-9 p.m. in Chandlers’ Funeral Chapel, Liverpool. Funeral service will be Thursday, December 28, 2017 at 11a.m. from Trinity Anglican Church, Liverpool. Reverend Judy Cross officiating. Burial will be in trinity Anglican Cemetery, Liverpool. No flowers. Donations to family. Online condolences may be made to www.chandlersfuneral.com.

Offer Condolence for the family of Whynot; Shannon Veronica