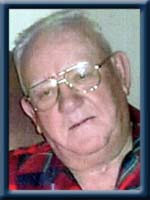 Born in Liverpool, he was a son of the late Simon and Eleanor (Whynot) Whynot.

Ross worked at an early age in the Richardson’s Lumberyard in Liverpool until the age of 19 when he went with Thompson Brothers, later Steel and Engine Products Limited (STENPRO). He worked there for 42 years until he retired in 1985 due to ill health. In his spare time, he would enjoy taking walks and playing his guitar at house parties with his family and friends. He also enjoyed hunting and his beloved, special companion Jippy.

He is survived by his only daughter Valerie (Gary) Joudrey of Liverpool; his sister Shirley McLeod and his brothers Frank and Eric (Mary Ann), all of Liverpool.

He was predeceased by his wife Nancy (Schrader); his sisters Lillian, Elizabeth Mossman, Madeline McLeod, June Oickle and his brothers Oscar and Thomas.

Visitation will be Tuesday, November 27th, 2012 from 7 until 9 p.m. and funeral service will be Wednesday, November 28th, 2012 at 2:00 p.m. both in Chandlers’ Funeral Chapel, Liverpool. Chaplain Donald Lawton officiating. Burial will be in Trinity Anglican Cemetery, Liverpool. No flowers by request, donations may be made to Queens County Branch of the Victorian Order of Nurses or to the Canadian Diabetes Association. Online condolences may be made to www.chandlersfuneral.com

Offer Condolence for the family of Whynot; Ross Edward