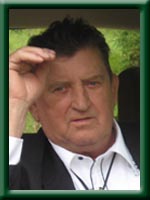 Born in Milton, he was a son of the late John “Joe” and Pearle (White) Whynot.

Rodney worked at the nickel mines in Sudbury and Falconridge as well as the gold mines in Timmons. He was a former employee with Stenpro in Liverpool and then Bowater Mersey Paper Company as a utility man in the wood room for 27 years. Rodney loved to fish and hunt, play guitar and bingo, traveling, and spending time with his family.

Visitation will be held Wednesday, February 17th, 2010 from 7:00 until 9:00 p.m. from Chandlers’ Funeral Home, Liverpool. A funeral service will be held Thursday, February 18th, 2010 at 2:00 p.m. from Trinity Anglican Church, Liverpool. Chaplin Donald Lawton officiating. Burial will be held in Trinity Anglican Cemetery. Family flowers only. Donations may be made to the Queens General Hospital Foundation. Online condolences may be made at www.chandlersfuneral.com

Offer Condolence for the family of Whynot, Rodney Eugene