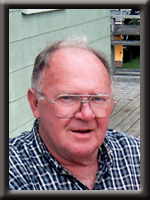 Born in Liverpool, he was a son of the late Calvin and Bridget (Sinclair) Whynot.

Robie was a papermaker  for Bowaters Mersey Paper Company Limited for 39 years retiring in 1993. He had a great love of the water and enjoyed fishing and boating as well as his cabin at Labelle. He enjoyed his early years in Port Medway spending time with his grandparents. He had a passion for driving especially the “scenic routes” and loved his grandchildren dearly. He was a member of the Papermakers Union # 259.

He was predeceased by his infant brother Calvin.

Funeral service will be Thursday, December 16th, 2010 at 2:00 p.m. in Holy Redeemer Anglican Church, Port Medway. Chaplain Donald Lawton officiating. No flowers by request, donations may be made to any charity. Online condolences may be made to www.chandlersfuneral.com.

Offer Condolence for the family of Whynot; Robie Bertram