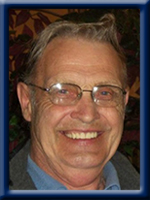 Born in Liverpool, he was a son of the late Robert Sr. and Maybelle (Anthony) Whynot.

Bubby worked many long hours at his job as a carpenter to provide his family with a good quality of life. He enjoyed the simple things that life had to offer. Bubby enjoyed playing baseball in his younger days and was an avid fan of the Toronto Blue Jays. Above all else, Bubby was most passionate about his family (which included his best friend and loving dog Oscar) and spending time with them.

Robert was predeceased by his sister, Gail Whynot.

Cremation has taken place under the direction of Chandlers’ Funeral Home, Liverpool. A Memorial Service will be held on Tuesday, January 26th, 2016 at 2:00 p.m., followed by a reception, all from Chandlers’ Funeral Home, Liverpool. Capt. Larry Campbell Officiating. Family flowers only. Donations may be made to the Liverpool Salvation Army or to the Nova Scotia Heart and Stroke Foundation. To share memories or condolences, please visit www.chandlersfuneral.com