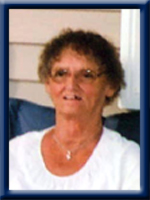 Born in Halifax, she was a daughter of the late Russell and Florence (McDermott) Mortimer.

Patricia worked at Mersey Seafood in Liverpool for many years until her retirement. She enjoyed spending time with her family, and watching her favorite T.V. shows.

She was predeceased  by her husband John “Jack” Whynot.

Cremation has taken place under the direction of Chandlers’ Funeral Home, Liverpool. A graveside service to celebrate Patricia’s life will be held at 2:00 p.m., Wednesday, September 18th, 2013,  from Trinity Anglican Church Cemetery, Bog Road, Liverpool. Reverend Judy Cross officiating. Family flowers only. Donations may be made to the Alzheimer’s Society of Nova Scotia. Online condolences may be made to the family at www.chandlersfuneral.com.

Offer Condolence for the family of Whynot; Patricia Mona