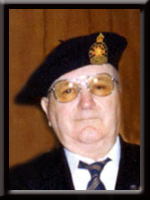 Born in Milton, he was a son of the late Edward and Ida (Deihl) Whynot.

Murray served with the Royal Canadian Army Forestry Corps overseas during World War II from 1940 to 1946.  Following the war, he was a salesman for Watkins Products and was caretaker and barkeep for a number of years with Mersey Branch #38, Royal Canadian Legion, Liverpool. He was employed with Bowater Mersey Paper Company Limited in Brooklyn retiring in 1983 after 15 years in the Janitorial Department. In his spare time, Murray enjoyed woodworking, being outdoors gardening and “digging up rocks”.  He was a member of Mersey Branch #38, Royal Canadian Legion, Liverpool and former member of the Queens County Veterans Club.

Funeral service will be held Saturday, January 4, 2014 at 11:00 a.m. in Chandlers’ Funeral Chapel, Liverpool. Reverend Judy Cross officiating.  Burial will be in Trinity Anglican Cemetery, Liverpool. Family flowers only, donations may be made to Trinity Anglican Church or to the Queens General Hospital Foundation.  Online condolences may be made to www.chandlersfuneral.com.

Offer Condolence for the family of Whynot; Murray Deihl