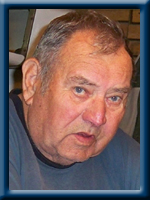 Due to the snowstorm, the visitation for Murray Whynot Sr. has been cancelled for this evening and will be held tomorrow morning from 10:00 until 11:00 a.m. prior to his funeral.   WHYNOT – Murray Allan Sr.  78, of Milton, passed away peacefully in South Shore Regional Hospital, Bridgewater on Wednesday, January 21, 2015 with family by his side. Born in Liverpool, he was a son of the late Eugene and Tessie (Cunningham) Whynot. Allan worked for many years for Thompsons and hauled wood with his horse. He owned a taxi service for over ten years. He enjoyed horse pulls and talking about the past with his old and new friends. His grandchildren and great grandchildren were the light of his life and kept him going, even when ill. He enjoyed listening to music and playing 45’s. He was always a kid at heart, always teasing others. He would welcome other into his home and was always generous and considerate of others. He was, to his family, one of a kind. He is survived by his daughters: Margaret Whynot (Michael Whalen) of Milton, Mary Roberts of Liverpool, Laura Whynot of Milton, son George Sr. of Liverpool, son in law Duane Hatt of Liverpool, grandchildren Wendell Whynot (Teresa Burns), Matthew Whynot, Roseanne Whynot, Samantha (Jonathan) Frail, and Ethel Whynot, all of Milton, George Whynot Jr. of Liverpool, great grandchildren Coady Whynot, Tiffany Whynot and Chantel Frail, all of Milton.  Sister Ethel (Eugene) Ingram of Liverpool, brothers Ronald (Linda) of Milton, Harvey of Liverpool, Myles (Angie) of Freeport. He was predeceased by his wife Madeline (Oickle), son Murray Jr., daughter in law Kimberly Murray, son in law Troy Roberts,  brothers Farish, Norman and Percy. Visitation will be Wednesday, January 28, 2015 from 10 until 11 a.m. followed by funeral service  at 11:00 a.m. both in Chandlers’ Funeral Chapel, Liverpool. Burial will be in Milton Community Cemetery. Reception be held in Milton Community Hall following committal. Family flowers only, donations may be made the family.  Online condolences  may be made to www.chandlersfuneral.com

Offer Condolence for the family of Whynot; Murray Allan Sr.