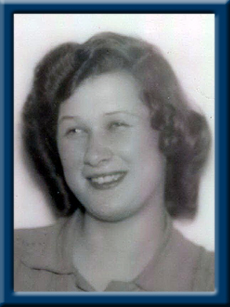 It is with heavy hearts that the family of the late Muriel M. Whynot, 84, of Liverpool, announce her peaceful passing in Queens General Hospital, Liverpool on Tuesday, February 14, 2017.
Born in Liverpool, she was a daughter of the late Walter and Eleanor (Conrad) Wells.
After finishing high school, Muriel enlisted in the Royal Canadian Air Force and served for five years. She continued her education and worked as a bookkeeper for the Town of Liverpool and T&C Pontiac Buick until her retirement. She enjoyed watching sports particularly curling. She also enjoyed arts and crafts, ceramics and latch hooking and reading recipes. One of her favorite pastimes was spending time with her family especially her grandchildren, but in particular, Sunday afternoons with her mother and her sisters discussing world events over tea. Muriel will be fondly remembered for her loving smile, generous heart and as a friend to all.
Muriel is survived by her daughter Jo-Ann (Joseph) White of New Ross and their children Jason (Mallory) and Jennifer; her sons Greg (Anne) of Brooklyn and their daughters Erin, Hannah and Leah and John (Barb) of Prospect and their daughters Jessica and Stephanie and her great grandsons Emerson and Lewis. Her sister Carol (Alan) Croft of Halifax, her brothers William (Rita) of Halifax, Roger (Lorraine) of Elliot Lake, ON, and James (Charlotte) of Liverpool.
Muriel was predeceased by her sister Shirley Whynot and her infant brother Walter.
Cremation has taken place under the direction of Chandlers’ Funeral Home, Liverpool. At Muriel’s request, there will be no funeral service. No flowers. Donations may be made to Queens S.P.C.A. or Queens Manor, Liverpool. Online condolences may be made to www.chandlersfuneral.com

Offer Condolence for the family of Whynot; Muriel Marie