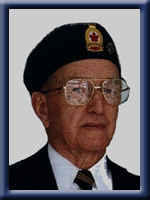 Maurice served as a lance corporal with the Royal Canadian Army Service Corps (Transport) during the Second World War supplying the front lines. He served in England, France Belgium, Germany, Italy and Holland. Upon his return, he worked for Bowater Mersey mill as a rigger foreman until his retirement. He was active in the Royal Canadian Legion, Mersey Branch #38, Liverpool having served as President for four years and also President of the Vets Club. On the 60th anniversary of the Liberation of Holland, he was able to make the trip along with his good friend Cameron Crowell and other comrades. Maurice was also a member of Trinity Anglican Church and served as sidesperson for a number of years.  He was a Past Worshipful Master and Past District Grand Chaplain of Prince of Wales Lodge # 29, A.F.& A.M. , Milton and a member of Arbutus Chapter #30, Order of the Eastern Star, Milton., a member of Rossignol Chapter #6 and Affiliate member of Zetland Lodge # 9, A.F. & A.M. Liverpool. He was also a member of W.G. Young Lodge and EBN Cockran Lodge. Maurice was a past Noble Grand of Strathcona Lodge #90, I.O.O.F. Liverpool. In his earlier years he was very active with the legion helping with suppers and poppy campaign, generally helping out wherever he could. He was also Parade Marshall during July 1st activities. During Provincial Volunteer week, Maurice was nominated Volunteer of the Year 2006 and received his volunteer plaque in Halifax from then Premier Rodney MacDonald. Also, in his earlier years, Maurice enjoyed hunting and fishing trips with family and friends.

He is survived by his sister Muriel (Frank) Morash, Moncton, NB; Sister in law June Whynot, Nepean, ON. And several nieces, nephews and cousins.

Visitation will be Thursday, December 30th, 2010 from 7 until 9 p.m. in Chandlers’ Funeral Chapel, Liverpool where a legion memorial service as well as memorial services for Masonic and Order of Eastern Star will be held. Funeral service will be Friday, December 31st, 2010 at 11:00 a.m. in Trinity Anglican Church, Liverpool. Chaplain Donald Lawton officiating. Burial will be in Zion United Cemetery, Payzant Street, Liverpool. Family flowers only, donations may be made to Trinity Anglican Church or to any charity. Online condolences may be made to www.chandlersfuneral.com

Offer Condolence for the family of Whynot; Maurice Eugene