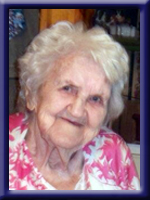 WHYNOT – Marion May,  97, of Liverpool, passed away peacefully in Queens General Hospital on Saturday, January 4, 2014.

Born in Halifax, she was a daughter of the late Henry and Elva (Beck) Wagner.

Marion was a hard worker all her life,; housekeeping for many families throughout Liverpool including the local funeral home. She enjoyed baking breads and was known for her chocolate cakes. She loved to read, work on puzzles such as “Find-A-Word”, and, in her younger years, she loved to camp, go to bingo and wrestling.

Visitation will be Wednesday, January 8, 2014 from 7 until 9 p.m. and funeral service will be Thursday, January 9, 2014 at 2:00 p.m. both from Chandlers’ Funeral Chapel, Liverpool. Captain Larry Campbell officiating assisted by Reverend Raymond Fancy. Burial will be in Trinity Anglican Cemetery, Liverpool. Family flowers only, donations may be made to Salvation Army, Liverpool Corps. Online condolences may be made to www.chandlersfuneral.com.

Offer Condolence for the family of Whynot; Marion May