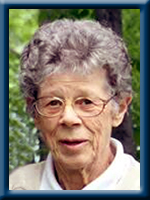 Born in Liverpool, she was a daughter of the late Guy and Lilly (Jollimore) White.

Marion was a former cashier with Dominion Stores and worked in the kitchen at Queens General Hospital, Liverpool for a number of years before her retirement.   She served as a Girl Guide Leader for 12 years and was an avid minor hockey grandmother as well as attending any events her grandchildren were involved in. Marion was known for knitting mittens for a Dartmouth church which were distributed to the neighborhood children. She loved family events, spending time at the cabin in Port Joli and her furry “grandbabies”. She will be fondly remembered and sadly missed by close friends and by her family especially her grandchildren.

Predeceased by her sister Joan Croft and brother Maurice.

Cremation has taken place under the direction of Chandlers’ Funeral Home, Liverpool. At Marion’s request, there will be no funeral service. Donations may be made to the Queens County Minor Hockey Association. Online condolences may be made to www.chandlersfuneral.com

Offer Condolence for the family of Whynot; Marion Louise