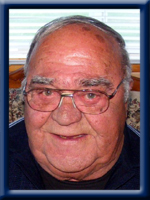 WHYNOT – Jordan Warner,  80, of  Milton, Queens County, passed away peacefully on Monday, January 27, 2014 in Queens General Hospital, Liverpool with his family by his side.

Born in Milton, he was the only child of Carl Edward and Maude Madora (Oickle) Whynot.

Jordan worked for over 30 years as a welder for Local 56, travelling numerous times across the country to provide for his family. He was a member of the Trail Rangers and Cub Scouts when he was a child and enjoyed hunting and fishing in his younger years. He was a self taught musician teaching himself guitar and, later on, the banjo. He played lead electric guitar in bands for many years and, later, playing for fun with friends. He attended bluegrass festivals with his wife, Marguerite, until her health deteriorated. They camped at Ponhook Campground during their retirement  years and could only be seen in town getting groceries a few days of the week  during the summer.

He is survived by his daughter Terrena (Steven) Parnell of Milton, his son Mark (Marielle) of Liverpool. Granddaughters Ashley (Ryan) and Taylor, both of Milton, his grandson Steven of Milton and his great grandson Jordan of Milton. His aunt Betty (Robert) Stuart of Halifax.

He was predeceased by his loving wife of 49 years, Marguerite Townsend, his granddaughter Charity, as well as numerous aunts, uncles and cousins.

Visitation will be Wednesday, January 29, 2014 from 7 until 9 p.m. and funeral service will be Thursday, January 30, 2014 at 2:00 p.m., both in Chandlers’ Funeral Chapel, Liverpool. Burial will be in Milton Community Cemetery. Family flowers only, donations may be  made to the Canadian Diabetes Association or to the family. Online condolences may be made to www.chandlersfuneral.com

Offer Condolence for the family of Whynot; Jordan Warner