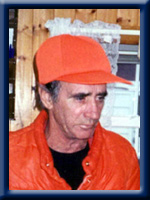 Born in Liverpool, he was a son of the late Roger and Clara (Oickle) Whynot.

He is survived by his companion Bonny Burns, his daughters Kelly Lynn and Clara Dawn, both of  Yarmouth and his stepdaughter Teresa. His step- grandchildren Coady and Tiffany. His sisters Sylvia (Carl) Corkum of Camperdown, Betty Ross and Evelyn Everett, both of Liverpool, Christina Slauenwhite of Vogler’s Cove. His brothers Borden (Carol) and Max (Etta), both of Liverpool and Dennis (Gloria) of Hunt’s Point.

He was predeceased by his brothers Roger and Eldon.

Funeral service will be Thursday, September 6th, 2012 at 10:30 a.m. in Chandlers’ Funeral Chapel, Liverpool. Reverend Judy Cross officiating. Burial will be in Trinity Anglican Cemetery, Liverpool. No flowers by request. Donations may be made to any charity. Online condolences may be made to www.chandlersfuneral.com

Offer Condolence for the family of Whynot; James Earl