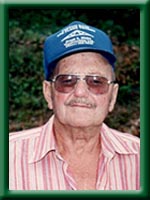 The funeral for the late Wilson Whynot which was to be held Saturday at 1:00 p.m. from Chandlers’ Funeral Chapel has been  rescheduled for Tuesday, January 5th, 2010 at 2:00 pm

Born in Milton he was the son of the late Frank and Katie (Hatt) Whynot.

In Wilson’s younger years, he worked in the woods. He ran his own trucking business, then went to work with the Department of Highways as an operator. He also spent a lot of time with his grandchildren and many hours with his horses.

He was predeceased by his son Harold and sisters Mary Fox, Nora Huskins and Irene Hanley.

Visitation will be held Friday, January 1st, 2010, from 7:00 until 9:00pm, funeral service will be held Saturday, January 2nd, 2010, at 1:00 pm, both from Chandlers’ Funeral Home, Liverpool. Burial will be in Milton Community Cemetery. No flowers by request. Donations may be made to the Alzheimer Society of Nova Scotia or to the Queens General Hospital Foundation. Online condolences may be made at www.chandlersfuneral.com.

Offer Condolence for the family of Whynot, Frank Wilson