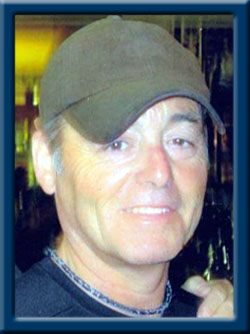 WHYNOT – E. Gaven, 66, of Liverpool, passed away peacefully in Queens General Hospital, Liverpool on Tuesday, September 13, 2016 surrounded by his loving family.
Born in Liverpool, he was a son of the late Earle and Edith (Richard) Whynot.
Gaven began his working career in 1972 with the Halifax Dockyards and returned to Liverpool in 1978 to work in the family business, Whynot Services Limited where he retired early due to ill health. He was active throughout the community serving on various committees such as Crime Prevention and Friends of Hank Snow Society and also received a Provincial Volunteer of the Year Award. He was a member of the Liverpool Firefighters Association and a founding member of the Queens County Ground Search and Rescue. He was a long-time member of the Men’s Bowling League and Mixed Bowling League. He also enjoyed riding his motorcycle and had travelled throughout Canada and the US. He was an avid country music fan having been to Nashville many, many times.
He is survived by his wife, Carla (MacIsaac); his daughter Michelle (Peter) Colp of Port Mouton, his son Stephen (Sheila) of Brooklyn; his grandchildren Haley (Brandon) Publicover, Jared Colp, Hayden Whynot and Deihl Whynot. His brother Norwood of Halifax; his niece Kimberlea Whynot and nephew Brad Whynot, both of Halifax. The mother of his children Louise Crowell of Brooklyn. His mother-in-law Tresa MacIsaac of Liverpool, his sisters-in-law Charlene of Liverpool, Cindy (Rick) Dorey of Hunt’s Point and Denise (Harold) Whynot and their children Presley and Bret of Liverpool. He will be missed by his companion “Muffy”.
Cremation has taken place under the direction of Chandlers’ Funeral Home, Liverpool. A celebration of Gaven’s life will be held in Chandlers’ Funeral Chapel, Liverpool on Monday, September 19, 2016 at 2:00 p.m. Reception to follow. Family flowers only, donations may be made to the Friends of Hank Snow Society or to Queens General Hospital Foundation. Online condolences may be made to www.chandlersfuneral.com

Offer Condolence for the family of Whynot; Earle Gaven