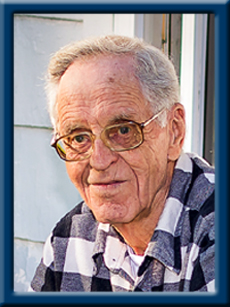 WHYNOT – Clyde D., “Buddy”, 88, of Milton, Queens County passed away peacefully in Queens Manor, Liverpool on Wednesday, May 29, 2019.
Born in Milton, Buddy was a son of the late Raymond and Phoebe (Saunders) Whynot.
Buddy was a long time employee with Astoria Beverages retiring after 54 years always feeling as if he was part of the Sapp family. He enjoyed hunting and fishing in his younger years with Jimmy, Paul and Tom. In later years, Buddy enjoyed playing cards in Port Joli with his wife Marion and their friends Florence, Fred and Ada. Buddy loved to spend time with his family especially his grandchildren and great grand daughter. His home was always ready with a cup of tea for his girls Charlotte and Chrissy, chores for his son in law Graham and a bite to eat for his grandkids. He will be lovingly remembered, but sadly missed by his family especially his girls.
Surviving are his daughters Charlotte (Graham) Parks of Milton; Chrissy Hunt of Greenfield. His grandchildren Zeke Hunt, Jillian Parks, Elijah Hunt and Jennifer Parks and his great granddaughter Meredith Mackenzie.
Buddy was predeceased by his wife Marion (White), his sister Daisy DeMond and brother Reggie.
Cremation has taken place under the direction of Chandlers’ Funeral Home, Liverpool. At Buddy’s request, there will be no funeral. No flowers. Donations may be made to any charity. Online condolences may be made to www.chandlersfuenral.com

Offer Condolence for the family of Whynot; Clyde Duncan “Buddy”