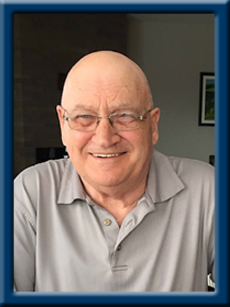 All you had to do was meet Charlie Whynot to know that he was a man who would be happy to drive you to an appointment or the airport, anything to lend a hand; unless it was a really good crib hand, in which case he preferred to keep it for himself. Fifteen two, fifteen four he’d count while he skunked you with a smile so big that you couldn’t help but smile along with him.
It is true that Charlie was an avid Blue Jays and Canadiens fan, but his most sacred teams were any that his grandchildren played on. Rarely missing a game, Charlie travelled with Stella around the province to sit in hockey rinks, find a bleacher for a basketball game, set up a chair at a baseball or soccer field, anywhere really where he could watch his grandchildren play. He was always proud of their accomplishments no matter how small and they were always proud of his ability to sniff out the canteen at any venue.
Charlie was a long time resident of Brooklyn and had an unparalleled love of the smell of the cow and pig manure at his hobby farm on Richardson Street – something that will always bring a smile to his long-time friends and neighbours. He was a loyal and cherished member of the community as well as an employee of Bowater Mersey from the time he was a teenager up until his retirement. One of his favourite pastimes in retirement was convincing Stella to move to the Annapolis Valley to be closer to family, which they did in 2013. Bampy spent summers in the strawberry fields with his grandkids, never eating a berry until the picking was done for the day.
Charlie lived and died with his family by his side and he cherished every minute with them. He was so incredibly proud of his kids and would do anything for them. He will live on most in the hearts of Stella, his wife of 40 years; his children Andy (Linda), Kerri (Mark) Thorburn, and Renee (Greg) Levy; grandchildren Kurtis, Avery, Mya, Charley; along with many extended family members and friends. He loved all of “Charlie and Stella’s kids” that were cared for in their loving home over the years. Charlie will cross the bridge to PEI as he always wanted to do, visit a Valley farm and strawberry patch before resting peacefully with his first wife, Pamela, in the Brooklyn Cemetery.
Charlie loved to be early for everything. He’d show up early for a school pick up saying, There’s Bampy’s girls, or, Hey Buddy! He would affectionately tell you, Bye Dear so that he could head off nice and early for his next “pop in” on friends or family – oh, and lord help you if you were the cause for him not to leave on time. Indeed, Charlie loved to be early, but those who loved him most are pained to have had to be early to say goodbye. If life is a crib hand, Charlie’s was a 29 and he will be deeply loved, forever missed and always cherished.
As dad always did…smile big, love hard, and always be kind.
Charlie’s family would like to send a heartfelt thank you to Dr. Hazen Burton, the Palliative Care team (Nurse Linda, Dr. Burgess, Jackie West) and the lovely VON nurses. Donations in Charlie’s memory can be made to the CAREY ME fund. https://www.vrhfoundation.ca/carey-me/

Offer Condolence for the family of Whynot; Charles “Charlie” Andrew