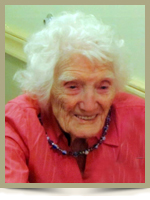 Whynot, Carrie Helena, 103, of Liverpool. It is with heavy hearts we announce the passing of Carrie on Saturday, April 5th, 2014, at Ryan Hall, Bridgewater, N.S..

Born in Liverpool on February 23, 1911, she was a daughter of the late Stuart and Ida (Trott) Smith.

Carrie was a beloved mother, grandmother and great grandmother. She was an avid knitter, bingo player and a wonderful cook. She loved to read and could “polish” off a novel in an evening before her eye sight failed her. She held many jobs throughout her long life, mostly in the restaurant business. Carrie was loved by everyone who had the privilege of knowing her, as well as casual acquaintances. She will be missed by all and many who enjoyed talking and asking questions regarding changes she had seen take place in the last 103 years.

She is survived by her adopted son (Grandson), Randall (Annette) Whynot, of Bridgewater; son, Einar (Dorothy), of Liverpool; many grandchildren and great grandchildren.

Cremation has taken place under the direction of Chandlers’ Funeral Home, Liverpool. The family will be holding a private ceremony at a later date. No flowers by request. Donations may be made to S.H.A.I.D. Tree Animal Shelter. Online condolences may be made to the family at www.chandlersfuneral.com

Offer Condolence for the family of Whynot, Carrie Helena