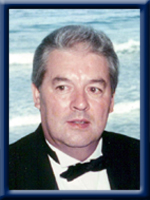 Born in Liverpool, he was a son of the late Kelly and Mary (MacLeod) Whynot.

Calvin was an auto body mechanic all his working life and was owner/operator of Cal’s Auto Body. He was a former member of the Liverpool Fire Fighters Association and loved to play volleyball. He was an avid car show enthusiast. He will be fondly remembered as a loving husband, father, grandfather, brother and uncle.

He is survived by his wife of 47 years, Sandra (Deveau), his daughter Tania (Norm) Amirault of Liverpool, his granddaughters Clare and Lauren, his sisters Phyllis (Lauren) McKiel and Ruth Ball, both of Liverpool, his brother Wendell (Susan) of Liverpool.

Visitation will be Tuesday, July 1st, 2014 from 7 until 9 p.m. and funeral service will be Wednesday, July 2, 2014 at 2:00 p.m., both in Chandlers’ Funeral Chapel, Liverpool. Reverend Steven Hopper officiating. Burial will be in St. Gregory’s Catholic Cemetery, College Street, Liverpool. Family flowers only, donations may be made to the Queens General Hospital Foundation or the Canadian Cancer Society. Online condolences may be made to www.chandlersfuneral.com

Offer Condolence for the family of Whynot; Calvin Roy