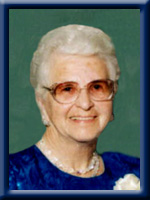 WHYNOT – Beulah Marie,  82 of Milton, Queens County, passed away peacefully Thursday, March 17th, 2011 in the QE II Hospital, Halifax with her family by her side.

Born in Western Head, Queens County, she was a daughter of the late Charles and Irene (Wilson) Levy.

In Beulah’s younger years, she worked at the Stedman’s Store, Sears in Liverpool and finished her working days with Sears in Bridgewater. In her spare time, she spent a lot of time with her grandchildren and then was blessed with great grandchildren.

Beulah is survived by  her daughter Diane (Aubrey) Coombs and son Brian (Nancy) both of Milton. Sister Beatrice Levy of BC. 5 grandchildren and 9 great grandchildren.

She was predeceased by her husband Frank “Wilson”, son Harold, sisters Myrtle and Irene and brothers: Clarence, Lorraine, Arthur, Ernest, Denvert and Jerry.

Cremation has taken place under the direction of Chandlers’ Funeral Home, Liverpool where visitation will be held Sunday, March 20th, 2011 from 7 until 9 p.m. and a memorial service will be held Monday, March 21st, 2011 at 2:00 p.m. Burial will be in Milton Cemetery. No flowers at Beulah’s request. Donations may be made to MADD or Heart and Stroke Foundation of Nova Scotia. Online condolences may be made to www.chandlersfuneral.com

Offer Condolence for the family of Whynot; Beulah Marie