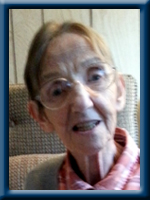 WHYNOT – Betty R., 84, of Beach Meadows, Queens County, formerly of Milton, passed away peacefully in Fisherman’s Memorial Hospital, Lunenburg on Wednesday, October 8, 2014 with her daughters by her side.

Born in Milton, she was a daughter of the late Frank and Katie (Hatt) Whynot.

She was predeceased by her husband Murray, her step great grandson Owen Sperry; her sisters Mary Fox, Irene Henley and Noreen Huskins, her brother Wilson.

Cremation has taken place under the direction of Chandlers’ Funeral Home, Liverpool. Funeral service will be Monday, October 13, 2014 at 11:00 a.m. in Chandlers’ funeral Chapel, Liverpool. Reverend Judy Cross officiating. Burial will take place at a later time in Trinity Anglican Cemetery, Liverpool. Family flowers only, donations may be made to Queens General Hospital Foundation or to Trinity Anglican Church. Online condolences may be made to www.chandlersfuneral.com

Offer Condolence for the family of Whynot; Betty Ruth