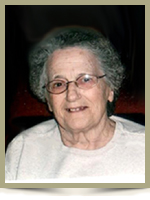 Born in Western Head, she was a daughter of the late William and Frances (Gerhardt) Croft.

Verna was employed in the housekeeping department of Queens General Hospital, Liverpool, for over twenty years. She enjoyed watching her beloved Toronto Blue Jays and playing bingo.

She was predeceased by her loving husband Maurice; a daughter in infancy; sister Alice; brother Roger.

Offer Condolence for the family of White; Verna May